Hermes Interactive and Team17 Digital‘s resource management puzzler Automachef gives players the opportunity to have a look behind the kitchen/restaurant scene.

Unlike the Overcooked games that rely on cooperative play when producing all sorts of food, Automachef is much more about the design of kitchens and the programming of machines when being on one’s own. There’s a certain sci-fi flair about it, as one builds automated restaurants and thinks about the code that runs them. More like a puzzle game than an exercise of communication, this doesn’t mean that delivering food isn’t stressful.

What looks rather complicated and is reminiscent of Human Resource Machine (see preview) turns out to be a game about problem solving, as one has to write appropriate codes and adjust them, depending on the situation. So if automation goes wrong, it’s not the fault of the machines, but of the player, in this case protagonist Robert Person. It sounds silly, but like all great puzzle games, it should be addictive enough, with engaging campaign levels, a contract mode, and a sandbox test mode. 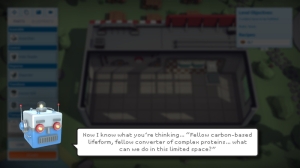 The game is now available on PC and Nintendo Switch, with the former having a 10% launch discount that will last until July 29th, 10pm UTC.