Game release: “The Church in the Darkness” (PC, PS4, Xbox One, Nintendo Switch)

Paranoid Productions and Fellow Traveller‘s top-down action-stealth game The Church in the Darkness presents a risky take on the cultist setting.

Even if AAA title Far Cry 5 or the more gruesome indie hit Outlast II (see my review) already tackled the problematic cultist subject matter, it’s still a brave move to dive into it with different gameplay mechanics. The Collective Justice Mission, a religious cult in the 1970s, is the focus now, and by infiltrating the so-called Freedom Town with Vic, an ex-law enforcement officer who wants to check on nephew Alex in the remote community built in the South American jungle, one finds out what is really happening behind the scenes. 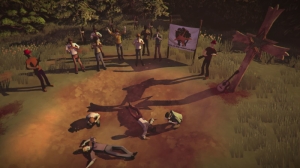 It’s up to the player how to approach the settlement, so stealth, non-lethal tactics or brute force and killing everyone are all viable options in this top-down infiltration title that doesn’t only offer action, but also adventure elements. Interrogating characters from Freedom Town and looking for clues reveal even more background information, while reading various documents and letters scattered around the camp create a more immersive feeling. While the graphics look a bit rough around the edges, the voice acting cast is quite interesting, as it includes Ellen McLain (known as GLaDOS from Portal). 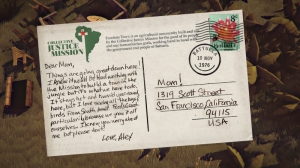 The game is out now on PC, PS4, Xbox One, and Nintendo Switch, with the PC version having a 20% launch discount that will last until August 9th, 3pm UTC.

1 Response to Game release: “The Church in the Darkness” (PC, PS4, Xbox One, Nintendo Switch)