It’s still a bit early for some frights before Halloween, but maybe it’s a good time to have some chills in summer. So this game might just be the solution to a season that isn’t ripe with terror or more subtle horror. Telling the story of Peter who wakes up in an abandoned mansion in rural England after a mysterious accident, the scene is set. The amnesia card is played, so that neither the player or Peter knows how he ended up there, but one thing is for certain: he isn’t alone and that his past is somehow connected to the place.

What follows is a a mix of exploration and survival horror, not too far removed from psychological terror games like Amnesia: The Dark Descent or Layers of Fear. Sneaking around dark corridors, running away from frightful things that go bumping in the dark, while trying to figure out what really happened in the mansion and how to get out alive all sound like familiar but still effective tropes of the genre. It remains to be seen how deep the storyline is and how many cheap scares there are or if all is rather more spine-tingling than it appears to be. At least it looks and sounds like a good scary time. 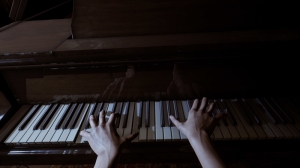 The game is out now on PC, with console versions for PS4, Xbox One, and Nintendo Switch to be announced soon. The PC version is also available with a 15% launch discount that will last until tomorrow, August 13th, 1pm UTC.