Aurora 44‘s and Annapurna Interactive‘s action-RPG Ashen finally arrives on other PC platforms and consoles with its DLC Nightstorm Isle.

Last year I had the chance to play Ashen in the Xbox booth at Gamescom 2018 and even if this wasn’t the best background to play it, the dark, brooding, and otherworldly atmosphere still carried over. The uniqueness comes from the lack of facial features, but also the mysteriousness of the world one explores as a wanderer who isn’t alone, though, because one soon meets other players who can join the adventure. This works more like the passive multiplayer in Journey (see my review), so one doesn’t need to interact with people if one doesn’t want to. Of course one can play it as a Dark Souls game and fight against each other, but cooperative play should be more rewarding, especially with all sorts of dangers ahead that are best tackled in groups. 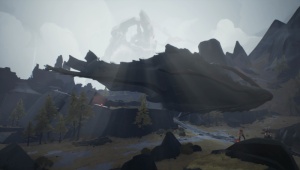 The DLC Nightstorm Isle is more story-focused, as it’s about the wanderer helping a mother to find her lost daughter, which means descending into the dark corners of the titular island. While this all sounds like standard fantasy RPG procedure, just looking at the screenshots and watching the trailer is enough to set it apart from others of its ilk, simply because it looks so strange due to its art style. It also has an epic Shadow of the Colossus vibe to it, which is always a good thing. 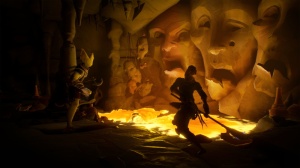 After having been released on Xbox One and as an Epic Store exclusive, the base game and its DLC are now finally available on other digital platforms. Consoles also get their versions, although at the moment only the base game shows up on the Nintendo Store, while the DLC as well as the PS4 versions aren’t available. Release problems aside, the PC version has a 20% launch discount that will last until December 16, 2019, 5 PM UTC.

Buy the base game for PC on
GOG
Steam

Buy the DLC for PC on
GOG
Steam

Buy the base game for Nintendo Switch on
the Nintendo eShop