It’s already been five years since I reviewed the development team’s dark and rather gruesome sci-fi adventure STASIS and discussed the freebie CAYNE with Later Levels editor Kim two years later. The newest game isn’t as confined in setting and much more epic in scope, feeling like a completely different title.

The company’s name and the fact that it consists of two brothers is reflected in the story which is about Mark who is looking for his lost brother Don in a world where advanced technology doesn’t necessarily mean a utopian society. Far from it, as one traverses African-inspired landscapes and encounters people who either help or prevent Mark from reaching his goal. Considering how claustrophic the former games were, this is a completely different proposition, with lush environments to explore and even an otherworldly language to listen to. With choices to make that change the course of the story, it really feels like an RPG title, but without level grinding and combat, rather focusing on classic puzzle solving. 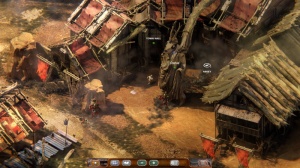 The game is out now on PC with a 10% discount if one already owns STASIS. If one buys the new game before March 4, 2020, at 5 PM UTC, then STASIS will be unlocked for free.

Being an avid gamer, cinemaniac, and bookworm in addition to other things the internet and new media present, I'm also very much into DIY music, rock and pop in particular. Writing short or longer pieces about anything that interests me has always made me happy. As both an editor for German website "Adventure-Treff" and UK website "Future Sack", I like to write reviews and news about recent developments in the movies, games and book industry.
View all posts by nufafitc →
This entry was posted in Uncategorized. Bookmark the permalink.