Amazon Prime Video in May had a surprisingly fun superhero TV show that really delivered. 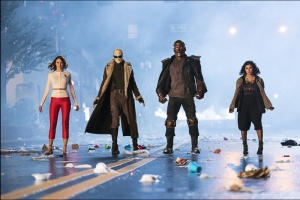 After having been highly disappointed by the hyped The Boys (see Amazon Prime Video watchlist: April 2020), my expectations weren’t high for the first season of Doom Patrol. Fortunately, this turned out to be one of the best (anti) superhero shows around, as it didn’t only have very memorable and interesting main characters, each with their own tragic background stories, but also an unprecedented villain who shaped the narrative and commented on the show itself. Part meta-fiction, part drama, and fully WTF, each episode had something unexpected, be it surprising twists, irreverent humor, different perspectives of the same scene, and many great one-liners. The chemistry between the heroes is great, and while there are a few rather long passages about certain parts of their lives, the plot still moves forward and has so many cool moments and plenty of gore, but also touching and very human sections about accepting diversity and personal fulfilment that one is eager to watch the next episode. Diving into the mind of a young woman with so many split personalities constantly coming to the surface that it’s impossible to know who one is talking to, jumping into a donkey to be transported into another world, or talking to a living street are only some of many genius ideas.

With all the superhero shows on every single streaming platform, it’s difficult to get excited about a new one, but luckily Doom Patrol is one of those that deserves to be promoted for its sheer inventiveness and humanity despite all the crazy ideas and outbursts of violence.

Being an avid gamer, cinemaniac, and bookworm in addition to other things the internet and new media present, I'm also very much into DIY music, rock and pop in particular. Writing short or longer pieces about anything that interests me has always made me happy. As both an editor for German website "Adventure-Treff" and UK website "Future Sack", I like to write reviews and news about recent developments in the movies, games and book industry.
View all posts by nufafitc →
This entry was posted in TV. Bookmark the permalink.