It’s been 2 years since I played Fury Unleashed on the first day of gamescom 2018, and I still remember its frantic action that was already impressive in its Early Access state. What makes it stand apart is the idea that one explores the pages of a living comic book that reflects John Kowalsky’s creativity crisis, being the author of the Fury Unleashed series himself.

Collecting ink is important for upgrades and staying alive, the latter of which is made easier by choosing specific skills and chaining combos together. It’s even possible to complete the game in one giant combo, so anyone looking for a challenge will have it here. Local co-op play is a nice touch, too, while the hand-drawn graphics are a joy to behold, not forgetting that the soundtack is composed by Adam Skorupa and Krzysztof Wierzynkiewicz who were already involved in the music for games like The Witcher or Shadow Warrior 2. 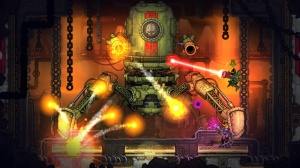 Fury Unleashed was originally released in May this year and is now available DRM-free on GOG with a 25% discount that lasts until August 5, 2020, at 1 PM UTC. The soundtrack can also be bought separately with the same discount.