With the original The Secret of Monkey Island celebrating its 30th anniversary today, it’s high time to have a look at Telltale Games’ (now LCG Entertainment and Athlon Games) episodic adventure game Tales of Monkey Island.

Guybrush Threepwood deprives ghost pirate LeChuck of his powers and returns him to his human form, but also brings a voodoo pox on himself and the whole Carribean world.

A new adventure outside Monkey Island
The game is divided into the 5 episodes Launch of the Screaming Narwhal, The Siege of Spinner Cay, Lair of the Leviathan, The Trial and Execution of Guybrush Threepwood, and Rise of the Pirate God. Mainly dealing with Guybrush finding a cure for the pox, the story still offers more than just a few surprises, e.g. the young pirate being swallowed by a manatee, proving his innocence multiple times during a trial, and being caught in a dispute between a pirate captain and merfolk about ancient artifacts. Unlike The Secret of Monkey Island, Monkey Island 2: LeChuck’s Revenge, The Curse of Monkey Island, and Escape from Monkey Island, one doesn’t visit the mysterious island once, but instead explores new locations and experiences a refreshingly different story.

A pirate’s life in episodes
Guybrush looking for a sponge that can cure the pox instead of hunting for Big Whoop is a silly premise, but it’s a nice change and proves that the series can work with TV format-like suspense and twists from start to finish. As is the case with most Telltale titles, episodes end with a fast-paced finale and a cliffhanger, but still bring each story to a satisfying self-contained conclusion.

Despite the bonkers story, puns and slapstick scenes that retain the humor of the previous games, Tales of Monkey Island never falls into the trap of ridiculing its characters and setting too much. A few touching moments make the game the strongest in terms of storytelling yet. While Guybrush has always been a likeable character, he’s more fleshed out and vulnerable than before, and even LeChuck shows more of his human side (quite literally) than one would think possible.

New foes
The new characters Guybrush meets are all memorable and fit nicely in the roster of eccentric people the series is known for, featuring mad Doctor Singe who wants to use Guybrush for his experiments, pirate hunter Morgan LeFlay whose feelings for the young pirate changes from being a target to something deeper, and many other minor characters. While most of the minor characters, like a ninja figurine collector, are used for puzzles, they don’t feel out of place or outstay their welcome, as is so often the case with episodic games recycling characters and locations.

Old friends
There are welcome returns of characters like world-domination-craving skull Murray, salesman Stan serving both as a prosecutor and selling merchandise connected to a trial, and the Voodoo Lady who becomes particularly important for the plot. Dialogues are never too long or too short, featuring some very funny lines. As most of the humor originates from the weird characters Guybrush meets, it doesn’t come as a surprise that talking to them is rarely a chore.

Headscratching and fun brainteasers
Puzzles are varied, fun and can often be solved in any order. Despite being rather obscure, the solutions are imaginative and rewarding. A few force Guybrush to act in very confined spaces and require observing the environment and using it to one’s advantage, e.g. being restrained on an operating table and making a lab monkey interact with objects one can’t reach, or taking over the body of the Voodoo Lady and shuffling cards that make other people do things somewhere else.

Face challenges
Insult swordfighting makes a return, too, although this time it comes with a twist that tasks the player to simultaneously make compliments to another character. In addition, there’s a face stand-off that is maybe not as complicated as the infuriating Monkey Kombat in Escape from Monkey Island, but it takes up too much time and is recycled later on as well. 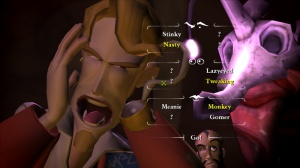 Variety in puzzles and problem solving
While there are some frustrating puzzles, e.g. following a cryptic map’s instructions to pass through a jungle labyrinth, there are more than enough memorable and ingenious ones. They’re usually well-integrated in advancing the plot, e.g. in Episode 4 in which Guybrush has to present evidence and interrogate witnesses after solving interconnected puzzles in between court scenes or in Episode 3 when he has to learn the language of a manatee and help it court a female companion. One rarely feels overwhelmed, because one doesn’t carry around too many items, the number of current problems is never too high, and the places one visits aren’t very big. 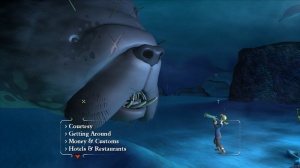 This doesn’t mean that one won’t have to revisit many locations and walk through the same screens again and again, ending up with trial-and-error problem solving. Thankfully Guybrush can optionally speak aloud and give hints at times, although these are sometimes too cryptic or too obvious. Unfortunately, a couple of sequences are time-critical, which becomes especially annoying in the more intense fifth act’s finale when Guybrush has a limited amount of time to combine objects and interact with the environment before being sent to the next screen. 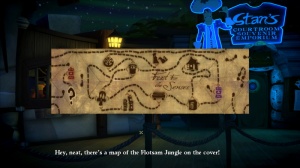 Claustrophobic open world
All the changes of settings and characters sound like a grand adventure, but the episodic structure and limitations of the Telltale engine prevent the game from evoking the same open-world atmosphere like its predecessors. So even if Episode 2 allows Guybrush to explore other islands around Spinner Cay, these are usually one-screen places than don’t add much to the Caribbean pensinsula feeling. However, travelling between these locations, especially in the finale that takes a surreal turn, is much more time-consuming than one would expect.

Stumbling and fumbling around in 3D
After Escape from Monkey Island introduced cumbersome controls with keyboard or gamepad, the new interface isn’t much of an improvement. It’s actually worse, because if one wants to use the mouse, one has to hold down a button and turn the mouse in the direction Guybrush should walk. A combination of keyboard controls with mouse isn’t perfect, but much better than using a gamepad and then pressing keys on the keyboard.

Managing the inventory isn’t much better, because combining items requires first putting one, then the other item in two separate boxes and finally hitting the “combine” button. The tried and tested drag-and-drop inventory items system of The Curse of Monkey Island (or any other classic graphic adventure) would have done wonders, in addition to a simple point-and-click movement interface.

Modern 3D looks and Caribbean sound flair
Unlike the ugly 3D models of Escape from Monkey Island, characters have a charming cartoon look and animations are also convincing. Locations vary in background quality and can’t quite compete with the pixel art of the original The Secret of Monkey Island, Monkey Island 2: LeChuck’s Revenge, and The Curse of Monkey Island. Episode 3 is especially bland with its visuals, and a few clipping and other graphical glitches the Telltale engine produces are noticeable, too.

However, voice acting is excellent, which is no surprise with Dominic Armato reprising his role as Guybrush Threepwood and other characters sounding just as great. With Michael Land being on board as the composer, the music is wonderful and offers the most varied pieces the series has seen so far.

Episodes of pirate greatness
Tales of Monkey Island shows that its episodic format is just as enjoyable as Guybrush’s previous adventures. It has imaginative puzzles, great humor, memorable characters, excellent music and voice acting, while it offers more story and character development than before. Despite user interface issues, confined spaces, and drops in quality in some episodes, it proves that the series can work in 3D, especially in the visual department.

With 3-4 hours playtime for each episode, it never outstays its welcome and offers a satisfyingly long adventure that speaks to both old and new fans of Guybrush Threepwood. Unfortunately, the game never received a second season, which makes the cliffhanger at the end of Episode 5 all the more annoying.