Kaigan Games‘ narrative thriller Simulacra turns modern technology into something quite scary to hold on to.

After having found the lost smartphone of young woman Anna, one investigates her disappearance and why the phone suddenly starts to act very strangely.

A person’s life in bits and bytes
Diving into a person’s private messages, e-mails and social media account already makes for an intriguing plot about voyeurism, but also about trust issues, sexual harrassment in both the virtual and real world. One interacts on various communication channels and uses all sorts of smartphone apps to learn both about Anna and her relationships. These are treated in a realistic and mature way, touching subjects like love and sex as well as personal growth, family, and independence. Trusting people becomes the biggest issue, because one doesn’t know who or what could be responsible for Anna’s disappearance, especially when one digs through an online finding partners website.

Genre mix in smartphone form
Categorizing the game as a thriller might not be accurate enough, because there are also horror and sci-fi elements. Without spoiling too much, suffice it to say that it becomes rather suspenseful and disturbing, as most of the phone data has to be restored and one discovers more secrets about Anna’s online and personal life, in addition to what is going on in the digital world and what happened to other people. So it’s not only social commentary, but a tense thriller experience with a few jump scares and other narrative twists, playing with the danger of being online 24/7 and questioning people’s true identity. As there aren’t any cutscenes, the story is told via messages, emails, and videos that are unlocked the further one progresses in the game. 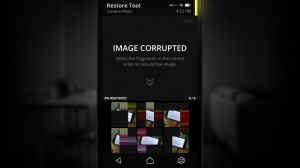 Digging through data and lives
The gameplay is a unique mix of finding clues on social media platforms and websites, while contacting various people via chatrooms and messengers. One has to be able to read lots of text, though, as the conversations can drag on for quite a bit. Restoring corrupted data, like text messages, photos or videos, is done by choosing the correct order of words and photo parts, which can become quite tiresome and repetitive. 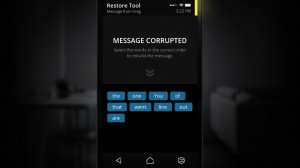 Puzzles often revolve around finding out people’s phone numbers, email addresses and respective passwords, and it’s not always clear how to do this, making for some frustrating moments without any helpful clues. Except for one sequence when one has a very short amount of time to type in three correct answers, made even more difficult by the cumbersome switching between apps to receive the relevant information, the gameplay fortunately doesn’t rely on fast reflexes. However, one has to live with one’s decision, because there’s only one automatic savegame slot.

Linearity and replayability
While there are many apps and phone numbers to use, in addition to text messages, emails, websites, and blogs to browse through, one isn’t overwhelmed by options, as a log informs the player about current objectives. However, despite a rather linear approach to game design, many decisions have to be made, resulting in multiple endings with various outcomes for Anna and her connections’ fates, making another playthrough, especially with the New Game+ mode that allows going faster through conversations, an interesting proposition. With the first playthrough clocking at around 4 hours, this is more than feasible.

Video, acting and sound skills
Compared to so many older FMV titles, the video quality is very high, with only the blurry backgrounds that can be seen around the corners of the phone lacking detail. But then again, most of the action takes place in message systems, while the picture quality of the photos is just as pleasing to the eye as the camera action that offers a few scary distortion effects.

The acting skills in videos, audio messages, and phone calls are sometimes a hit-or-miss affair. Still, there are far worse examples and except for a few exaggerated deliveries of lines, one never feels in B-movie territory. The title music is quite catchy, but the background noises during the game are much more important, as sudden knocks on the door or whispering voices create the illusion of sitting in an apartment with a phone in one’s hand. 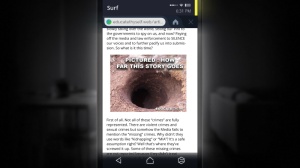 A phone one won’t forget so easily
Simulacra makes perfect use of the smartphone apps and social media setting with its gameplay and storytelling, the latter of which featuring some believable characters and unexpected narrative twists und turns. Even if there’s a lot of content to read through and one often finds oneself lost in a few of its puzzles, the game remains a compelling experience that only take a while before frights and thrills kick in. With multiple endings and decisions to be made, the game offers something very unique that can only work in this medium, no matter if it’s played on PC or mobile devices.

Buy the Android version on
the GooglePlay store