What would happen if the Jackass humor carried a Christmas theme and threw it down the toilet? Bam Margera Presents: Where the #$&% Is Santa? is probably the result. 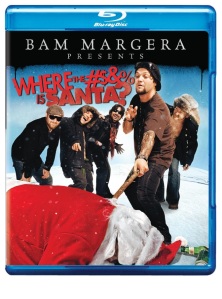 A chaotic troop of MTV celebrities help Bam to find Santa Claus in Finland and bring him back in time for Christmas.

Having an obnoxious main character in a series with an even more obnoxious circle of friends who abuse themselves doesn’t sound like the best idea for a full-length movie, especially with Christmas as a theme. But Bad Santa already showed that this can work. While Bam Margera Presents: Where the #$&% Is Santa? is nowhere near as enjoyable or accomplished as this comedy, it at least delivers what one expects from the MTV and skateboard star.

For those who don’t know Margera, it’s enough to watch Jackass where he does stunts or in Viva La Bam! where he behaves as, well, a jackass, usually tyrannizing his dad and family in general. The Christmas movie isn’t anything else than one sequence of anarchy humor after another with often headshakingly disgusting and stupid ideas. If one has a weak stomach, one will have quite a few scenes to skip. Tolerance for sexist remarks and constantly hitting people (or putting them in boxes) is as much needed as a total acceptance of the absence of any meaningful plot elements. Apparently, these should all be Mad-Magazine styled parodies of beloved Christmas stories, but one could also argue that finding Santa is an excuse for abusing and hurting others on camera.

While this all sounds quite terrible in addition to the problematic MTV-staged drama elements with horrible forced acting, the movie is still quite entertaining if one can cope with the anarchy humor. The reason for this is that despite missing spectacular stunts the Jackass series is known for, there are many scenes which are so over-the-top ridiculous and silly that one simply has to laugh, e.g. making a giant tree fall down on a car. It’s pointless to talk about Margera as a likable character or the others who just go with the flow, and it’s also pointless to discuss the various music artists (like the bands HIM or The Bloodhound Gang) showing up in order to kick the very shallow plot in the narrative butt. The point is simply to take the movie as it is: a very long music video with catchy rock tunes and a bunch of people getting hurt, sick or simply being their obnoxious selves (or what the script/MTV tells them to be).

Buy the BD on
Amazon USA

Being an avid gamer, cinemaniac, and bookworm in addition to other things the internet and new media present, I'm also very much into DIY music, rock and pop in particular. Writing short or longer pieces about anything that interests me has always made me happy. As both an editor for German website "Adventure-Treff" and UK website "Future Sack", I like to write reviews and news about recent developments in the movies, games and book industry.
View all posts by nufafitc →
This entry was posted in Movie reviews, Movies and tagged anarchy, Bad Santa, Bam Margera, Bam Margera Presents, Bam Margera Presents: Where the #$&% Is Santa?, celebrity, Christmas, comedy, Finland, HIM, humor, Jackass, Joe DeVito, Mad Magazine, MTV, parody, Santa Claus, skateboard, skateboarding, star, stunts, The Bloodhound Gang, Viva La Bam!, Warner Bros Home, Warner Bros., Where the #$&% Is Santa?. Bookmark the permalink.