Arcade fighting games and management sims shouldn’t go well together, but Lazy Bear Games‘ Punch Club might just have found a way of the fist that works fine.

If you’ve ever wondered what it’d be like to fight your way to the top in a ring of like-minded fist acrobats, just like in the Rocky series, but always thought that boxing games were lacking a story or were too simulation-heavy, then this title could actually address all these problems. 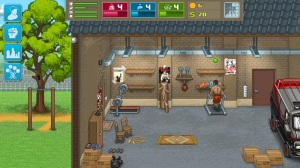 There’s an arcade-like revenge story (dad got killed by a stranger, son wants to find justice in the ring), and the visuals are also highly reminiscent of games like the Double Dragon trilogy. But the player is on his/her own, because it’s all about going against various opponents 1-on-1 style. In order to win, one has to train, which of course costs money. It’s not only essential to win, but to find balance in life as well. 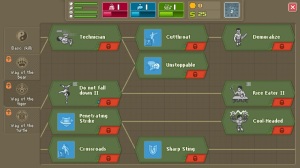 What’s the most impressive about the game is not only the non-linear narrative, but also the freedom of choice and the sheer options how to tackle the fighter’s career, showcased in a branching RPG-like skill tree. Leading a life as a super boxer, a criminal, running one’s own gym or simply neglecting everything and everyone is all possible. With many nods to classic gaming (e.g. eating chicken legs as in Streets of Rage), this seems to be an interesting approach to the often dry simulation genre.

Buy the standard edition for PC on
GOG
Steam

Buy the deluxe edition for PC on
GOG
Steam