May 2019 was another fun month for watching TV shows and even one movie.

The first season of Haters Back Off! is highly reminiscent of Napoleon Dynamite, but adds a YouTube celebrity touch. While both share the same idea of showing weird characters behave in even weirder everyday life situations, liking wanna-be star Amanda is a little bit more difficult. Being presented with an annoying voice and an even more asocial way of treating her mother and sister, it’s not easy to feel anything for her. However, if one perseveres, one will see a side of her that is much more vulnerable. Despite the more outrageous over-the-top comedy, there are so many great ideas in each single episode which don’t only criticize and make fun of the YouTube generation, but are also highly original and memorable. Dramatic and more serious elements are also implement in the final episodes, but they work surprisingly well. So even if there are just as many bad jokes and shameful scenes, there is still a lot of heart in the show, making it as great if not better than what Napoleon Dynamite would have achieved as a TV show. 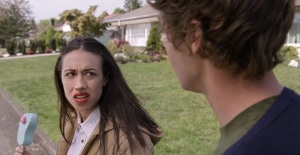 The second season of Haters Back Off! offers more of the same anarchic humor and inappropriate anti-social behavior the first one had. It’s not all comedy, though, as again the drama elements add a much-needed personality to proceedings. Even if it’s often difficult to like the main protagonist, Amanda and her strange relationship to her long-time admirer Patrick provide a sense of emotion and compassion one wouldn’t have expected. Again full of crazy ideas and memorable situations, it’s a shame that this series won’t receive a third season, because at the end of it, one has come to feel for every single character as weird and sometime obnoxious as they are.

Lunatics is what one would expect a Chris Lilley TV show to be: politically-incorrect, often very silly, and not for the easily offended who don’t like shameful situations. Just as We Can be Heroes, Summer Heights High, Jonah from Tonga or Angry Boys, one is introduced to characters that are weird and often obnoxious. However, the more one learns about them, the more one can strangely relate to them. So a college girl (obviously played by Lilley) who is so tall that he/she bumps his/her head on a room’s ceiling trying to be popular with her YouTube personality (similar to Haters Back Off!) and a store manager loving his cash register might be socially unacceptable, but they end up to be lovable at the end. Of course the jokes are often of a sexual nature, and as always, the way how Lilley portrays a boy with lots of cursing or a bitchy woman who can get into the psyches of animals is as convincing as it is annoying, depending on one’s disposition towards a man wearing woman’s clothing or running around in a fat boy’s pants and shirts. It’s all very funny and silly, but it’s also very touching and human, giving a lesson in understanding and accepting everyone, something that few comedy shows deliver (and that’s why I’ve never been a big fan of the geek portrayal in Big Bang Theory).

The second half of Pokémon: Sun and Moon, Season 1, offers the same kind of light-hearted anime action and silliness as the former one I watched in April. This means that the main storyline isn’t much to write home about and one simply uses the TV show for recreation purposes. Well-drawn backgrounds and characters with some over-the-top voice acting that is typical for animes complement the package, although one soon wonders if any suspense or excitement sets in, as the disconnectedness of the episodes doesn’t make it easier to watch in one sitting.

Sometimes a movie can be hyped and advertised in so many wrong ways. Comparing Super Dark Times to Donnie Darko is a big joke, as it doesn’t have any supernatural or sci-fi elements. The 80ies music and atmosphere might be tangible and it’s fortunately not as forced as in the boring TV show Stranger Things (see see Netflix watchlist: April to May 2017 and Netflix watchlist: January 2018), but it doesn’t help the movie from trying too hard to be something it isn’t. A coming-of-age story mixed with a Stand By Me murder mystery, it fails on so many levels, mainly because of its uninteresting and obnoxious characters. If the whole sex talk wasn’t enough, the suggestive dream sequences hammer home the message that it’s all about teenage angst. Even if it becomes rather violent at the end, suspense as well as humor rarely work, making this one of the most forgettable experiences I’m glad not to have bought the limited mediabook BD version of.

May 2019 was focused on weird characters and mostly teenagers, and while the weird ones are usually the most interesting, it goes to show what happens if one doesn’t portray them in a humorous way, but tries to be so super dark that one already loses interest. Thankfully I didn’t lose any money for that movie and saved on the collection shelf space.

Being an avid gamer, cinemaniac, and bookworm in addition to other things the internet and new media present, I'm also very much into DIY music, rock and pop in particular. Writing short or longer pieces about anything that interests me has always made me happy. As both an editor for German website "Adventure-Treff" and UK website "Future Sack", I like to write reviews and news about recent developments in the movies, games and book industry.
View all posts by nufafitc →
This entry was posted in Movie reviews, Movies, TV. Bookmark the permalink.

3 Responses to Netflix watchlist: May 2019