Remakes or remastered versions of classic games can both be a blessing and a curse with one alienating fans of the original and the other being too faithful without any originality. So is Double Fine Productions’ Grim Fandango an improvement of Tim Schafer’s 1998 version?

Unfortunate salesman(skeleton) Manny Calavera finds a suitable client whose fate of not having the right ticket to the afterlife throws him into a world of glamour, betrayal, revolution and redemption, only helped by his all-mechanical-things-loving demon friend Glottis.

It probably started in poetry; almost every great game does
The plot and presentation might be influenced by film noir with nods to Humphrey Bogart, and there are a few allusions to more contemporary movies such as Indiana Jones, but what the game offers is much more than referential cinematic storytelling. The world Tim Schafer created is still as compelling as when it was released, which is also why the mix of Mexican folklore, art deco design and silly humor in combination with drama is certainly not for everyone. But the way everything gels together is an indication of how timeless this game is.
Even if the world is populated by skeletons, demons and burning beavers (no kidding), it all feels very real. This is mainly due to the excellent dialogue that strikes a fine balance between genuinely funny moments with a sad and melancholy undertone. At times the spoken lines are also quite poetic, as when Manny goes on stage in a club and the player can choose between different sentences to create a poem, highlighting the absurdity but also beauty of postmodern poetry. Still, not everything is doom and gloom. There are enough slapstick scenes and crazy ideas to keep the old LucasArts spirit alive, although the humor is usually of a much darker nature. 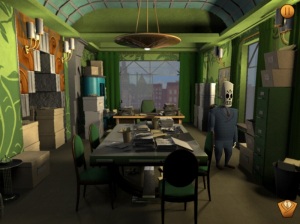 Dead tongues are heavier than broken speech
Dialogues with NPCs are always a highlight, as they’re not only used as part of the puzzles, but they’re memorable enough to stay in the player’s mind long after the game is completed. For example, there’s a small creature who always follows the light of his lantern without realizing he’s constantly running in circles on the bottom of the ocean. Then there’s a sea captain whose true love was a ship, a coroner who laments the death of people who got sprouted (being killed again in the afterlife by a flower gun), to name but a few. 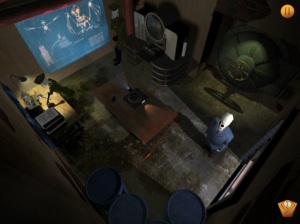 What’s also great about the story, the world and its characters is how the chapters are divided into different years, showing the changes in people. It’s not only the growing friendship between Manny and Glottis that is touching, but also how other characters behave, and how old locations have changed when revisited. There’s simply an unparalleled wide scope in how everything and everyone is connected without making the mistake of so many modern adventure games to overwhelm the player with overlong dialogues and characters who are more like fillers to tell their often uninteresting stories.
One can write so much about the plot, but this would also spoil most of the surprising elements of the game, so suffice it to say that it’s touching, crazy, full of twists and turns, memorable places to visit and vistas to be astonished by. There’s rarely any downtime with only the puzzle design slowing things down quite a bit.

The puzzles fell like dead thoughts
Tim Schafer games have always shown some crazy lateral thinking required to solve their puzzles. Grim Fandango is no different, and this is where the gameplay can’t quite match the storytelling’s ambitions. Granted, the puzzles are usually well interwoven with the plot and its characters, and there are genius instances when everything falls together, e.g. when giving a group of working bees the rhetorical tools to start a revolution in order to get their real working tools, when bringing Manny’s own financial downfall in a casino, or when faking the death of a crew member to fill in his position.

There are often multiple goals at the same time, which is quite motivating, but also quite frustrating. The way how these problems are tackled is never obvious, and only with more puzzle chains being solved does one get a general idea of how it all connects, even if this can result in instances when one realizes what an effect a certain action has after having done it. Unfortunately, clues are sparse, and without a hotkey, important objects can easily be overlooked.
Still, despite some convoluted puzzle design and some very annoying parts which require certain fast reflexes, half of the fun is to figure out how crazy and also how surprising the solutions are. Getting into the mind of Tim Schafer is certainly no easy feat for modern gamers, used to have signposts everywhere. That’s where the remake could also have provided a hint system or at least a hotspot key, but both are absent. There aren’t any new puzzles as well, making this a very seen-it-before experience for players familiar with the original.

Ever since graphics could walk, sound could talk
The game’s graphics hold up very well today, which is mainly due to a combination of the impeccable art design that shows in both characters and backgrounds, while the minimalistic facial expressions and animations work wonders, compared to other aged 3D games. It’s impressive how a few changes can make all the difference when one sees bloodshot eyes in the face of Glottis or a sad expression in Manny’s. Sure, running and walking animations in addition to some other movements look a bit ropey, but compared to titles like the old Resident Evil, seeing Manny explore all the locations is still handled with grace.
Maybe these already good-looking and actually timeless graphical features are the reason why the improved graphics in the remake are only slightly noticeble, with fewer edges on the characters and a more detailed lighting system. But compared to the original, there isn’t a big step forward, as e.g. in the Halo HD remake that was already a huge difference in the Xbox 360 version, compared to the original Xbox. Of course it’s a bit unfair to compare an FPS to a 3D adventure game, but one has to be aware that the visuals aren’t mindblowingly different. What this also means is that the art direction is left intact, something other remastered versions like Monkey Island or Broken Sword experimented and ultimately failed with. It’s also possible to switch between the old and new graphics with a simple button press.

The voice acting and soundtrack are two other highlights of the game, which are perfectly casted and performed. Having played this in both English and German, this still remains one of the best voice acting of the era and it’s difficult to name another game today that matches its quality. The music is also very varied and catchy with a combination of jazz, swing, bebop, Mexican and other string/flute music. It’s one of those scores one can endlessly listen to outside of the game as well.
Maybe this original perfection is the reason why the remake’s re-recorded orchestral soundtrack doesn’t impress much. After having played the original so many times, there’s rarely any difference at all, to be honest. Of course this has the positive side effect that the tunes haven’t been tampered with, as in the recent Final Fantasy or Kingdom Hearts remastered versions. An optional and insightful audio commentary by Tim Schafer is also a nice, even if not particularly surprising bonus.

It was difficult as hell, controlling a lot of hardships
Having talked about Capcom’s seminal survival horror game before, despite their differences, Resident Evil and Grim Fandango share the same problems, mainly controls and camera position. When Tim Schafer’s game was released, only keyboard or joypad were supported, resulting in a tank control scheme that didn’t bring many classic point-and-click followers to this LucasArts swansong. Fortunately, the remake offers full mouse control, and this is a definite improvement, as navigating through the environment is much more comfortable. It also makes the camera control problems less prevalent.
However, some issues still remain with an inventory system that has to be browsed through on a separate screen in order to find the right item, which is extremely frustrating in a few instances when one hasn’t much time to interact. There are also a few glitches and bugs in the game, e.g. with one scene where Manny’s head is completely missing. At times, the game is also unforgiving with specific actions which have to be done in a specific and in one instance very strict order, otherwise resulting in dead ends and reloads. These are very few examples of rushed bug testing, but they’re still annoying to encounter.

It’s not always to the benefit of the platform to have it so preordained
The PS Vita version is a very good port with crisp graphics, although some compromises have to be made with the smaller screen size. There’s an option to play it in widescreen without the black borders, but this stretched image isn’t the best way to experience the game. With black border frames retaining its original 4:3 format, it looks just great. Audio quality is also as perfect as in the PC version, while the touch controls work excellently. One can of course use the tank scheme, but after a while, sore thumbs are the result of this unthankful labor.
What’s also great about the PSN version is that one can play it on the PS4 thanks to Cross Play. Having no next-gen console yet, I can’t say how it plays or looks, but I’m pretty confident that it’s the same as on the PC, only on a bigger screen, and with the help of the touch pad of the PS4 controller, this should play rather comfortably.

Here’s looking at you again, Grim
Grim Fandango is one of the greatest adventure games ever made and probably one of the greatest cinematic experiences one can have, making the presentation and storytelling unique to the medium unlike anything else. Despite being almost 20 years old, it’s as immersive and compelling to play as when it was released. If one can accept the high difficulty of the puzzles with a less than perfect inventory system and some very annoying bugs…

It’s easy to recommend Grim Fandango: Remastered to newcomers for its story and presentation alone despite the weird puzzle design due to the lack of clues and the absence of a contemporary hint system. However, it’s difficult to recommend to fans of the original who expect something new, because it looks, sounds and plays almost the same. Then again, the changes to controls and improved graphics are welcome (as are the audio commentary and concept art gallery), making this the definitive version.

Buy the PS4/PS Vita game on
the PSN store

If you liked reading this article, make sure you pay a visit to Future Sack which kindly features it as well, and every LIKE or comment is appreciated on EMR’s Facebook page or FS’s Facebook page :).
Using the GOG link and buying the product also helps ;).

Being an avid gamer, cinemaniac, and bookworm in addition to other things the internet and new media present, I'm also very much into DIY music, rock and pop in particular. Writing short or longer pieces about anything that interests me has always made me happy. As both an editor for German website "Adventure-Treff" and UK website "Future Sack", I like to write reviews and news about recent developments in the movies, games and book industry.
View all posts by nufafitc →
This entry was posted in Game reviews, Gaming and tagged Double Fine Productions, GOG, Good Old Games, Grim Fandango, Grim Fandango Remastered, LucasArts, PC, point-and-click adventure, PS Vita, PS4, remake, remastered, Steam, Tim Schafer. Bookmark the permalink.